Do you know the history and importance of the Panama Canal for international maritime trade? Trade routes have played an important role throughout history, allowing countries to trade from spices to automobiles and electronics. Today, more than 90% of all products manufactured and sold globally are transported by ships. They make the world’s oceans, seas and rivers an integral part of the supply chain for many companies.

The Panama Canal in Central America is an important part of these merchant routes. Inaugurated in August 1914, it connects the Atlantic Ocean (via the Caribbean Sea) to the Pacific Ocean and serves more than 140 commercial routes in the world. It connects about 80 countries and helps to move approximately US $ 270 billion in cargoes per year. The 48-mile stretch (a total of 77 kilometers) of waterway allows ships to avoid the long route from Cape Horn around the southernmost tip of South America, where strong winds, currents and icebergs make these waters one of the most world’s toughest. 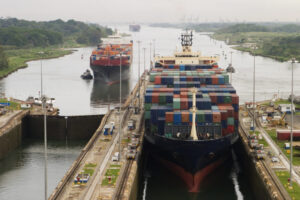 As the transportation of cargo by sea can take several weeks, the Panama Canal reduces time and costs in maritime operations. “The reduction in travel time to cross the Atlantic and Pacific oceans by ship has allowed different regions to become more economically integrated. The routes from Asia and Europe today have a faster and cheaper option to connect to the Americas, regardless of where they are ”, adds Daniel Mello, sales executive at Allog.

Thanks to the Panama Canal and the efficient operation that takes place in it, the transit time of a cargo between the Itajaí complex, in Santa Catarina, to Los Angeles (USA), for example, is approximately 30 days. “Without the channel, the average time for this trip would be 60 days”, observes the professional. In addition to cargo linked to the United States, volumes with origin and destination in China, Chile, Japan, Peru, South Korea, Colombia, Mexico and Ecuador stand out.

Check also: THE 10 MOST IMPORTANT COUNTRIES TO BRAZIL

The participation of countries on the East Coast of South America, such as Brazil, Argentina and Uruguay is small compared to the other countries. Together, the shipments and arrivals of these countries correspond to only 7% of the volume handled by the channel in 2018. Countries on the West Coast of South America, like Chile, Peru and Ecuador, are the ones that use the channel the most.

Navigation on the Panama Canal is also considered safer than other channels such as Suez (Egypt) and Kiel (Germany). Registering an incident for every 4,000 vessels that pass through there.

Opened in June 2016, the expansion of the Panama Canal created a traffic strip through the construction of a new set of locks, doubling the capacity of the waterway. The work enabled the passage of ships that can carry between 13,000 and 14,000 TEUs, almost three times the size of the 5,000 TEUs that the original locks could withstand.

The expansion project consumed enough steel to build 22 Eiffel towers, cost US$ 5.2 billion and took nine years to complete. The two sets of locks – one on each side of the Atlantic and the Pacific – and larger and deeper shipping channels have accelerated the delivery of goods, making the global economy more dynamic.

In order to use the channel, it is necessary to pay a usage fee (toll) to the Panamanian authorities that control the flow of ships. The average annual revenue is US$ 2 billion per year. The value of the toll is calculated based on the value of the cargo transported. The average cost of passing a ship is around US$ 143 thousand (which can reach US$ 250 thousand, depending on the size of the vessel), or, still, an average cost of US$ 8.73 per ton of cargo handled.